Great Zimbabwe is a ruined settlement that is believed to have been lived in by people from the Iron Age until the sixteenth century.  It was clearly a city with huge power in South East Africa, yet no one really knows which civilisation it was part of.

Not a great deal is known about the settlement, or the reasons why it was abandoned but it clearly was a centre for political power and trade, with archaeologists believing there was a huge royal palace there for the local leader.  Evidence has been found of trade with countries as far away as China.

During Zimbabwe’s time as part of the British Empire, the country of Zimbabwe was called Rhodesia. Attempts were made to claim that Great Zimbabwe had not been built by Africans. Historians now know this not to be true and when Zimbabwe gained independence the country was named after these ruins. 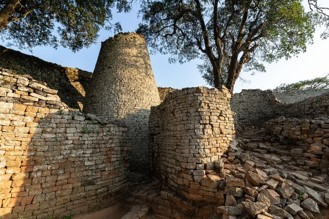